For 1960, the 300F was again available in convertible and hardtop body-styles. Chrysler increased horsepower for the first time since 1958 introducing a new ram-inducted 413 cid Wedge V8 which boasted 375 bhp in standard form and a whopping 400 bhp as an option backed by a four-speed manual gearbox. These changes were successful yielding a 75% sales increase over the 1959 model year. The 300F was also sported an exotic ram induction intake manifold system with 30-inch induction tubes placing the carburetor feeding each bank of cylinders out beyond the rocker cover of the opposing cylinder head. The new induction setup gave away five horsepower to the previous year's inboard carburetion but added 45 foot pounds of torque at 800 rpm lower.

Engine hardware included a performance cam, dual point distributor, special plugs, heavy-duty valve springs, low back-pressure exhaust system, low- restriction air cleaner, and dual four barrel carburetors. The carburetors were mounted on a wild looking cross-ram manifold that put one air cleaner on each side of the engine. The stacks were 30 inches long and had to be criss-crossed to fit under the hood. These long rams were designed to produce a supercharging effect in the heart of the rpm range. At low speeds, the "long" rams worked great, but they hurt performance above 4,000 rpm. To solve that problem, Chrysler's engineers removed a section of the inner walls of the manifolds to create the optional 400 bhp engine. On the outside, these "short" rams looked the same, but they were effectively only 15 inches long. Only 15 of these "short" ram cars were built, mainly for Daytona or Flying Mile race cars. The $800 "short" ram option also included a rare four-speed Pont-a-Mousson manual transmission, a French made transmission made for the Facel Vega, a Chrysler powered French luxury car. One of the 400 bhp cars set a Flying Mile record of 144.9 mph. The 1960 300 F also was the first year to use Chrysler's weight saving uni-body construction, which further helped performance. 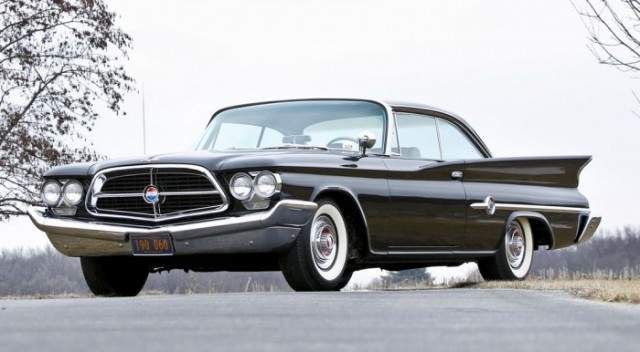 A true muscle car by any definition, Chrysler engineers reportedly built anywhere from seven to fifteen of these "GT Special" Chrysler 300Fs. Starting with the big-and-powerful 413 cubic-inch, 375 horsepower V8 engine, Chrysler engineer Burton Bouwkamp swapped out the long-runner intake for one with short runners, and replacing the hydraulic camshaft with a more potent solid-lifter cam.

Add to that iron headers, a limited slip differential, and a 4-speed manual transmission that replaced the 3-speed TorqueFlite automatic for a race-worthy muscle car ready to break records. With Racer Gregg Zeigler at the wheel, this modified Chrysler set the flying mile record at Daytona Beach at more than 144 mph.